Piaget believed that development moved from the individual to the social. He described development in a number of stages – sensorimotor, preoperational, concrete operational, and formal operations.
Preoperational Stage
The preoperational stage occurs between the ages two and seven, and it is divided into the preoperative and intuitive phase.  The child’s imagination develops and they can take part in make believe. The child understands the relationship between the past and the future.
Egocentric
According to Piaget, a characteristic of a young child is his inability to see a situation from another person’s point of view.
Piaget believed that the egocentric child assumes that other people see, hear, and feel the same as the child does.

Preoperational phase
A young child is according to Piaget not impervious to social influence, and the young child’s speech and thinking is egocentric. The child’s  thinking is also animalistic. The child can think about an object without the object being in front of him.
A toddler thinks that everything is alive, or has human characteristics because they move or grow. From an adult’s perspective, animism adds a bit of magic to the child’s symbolic representations. 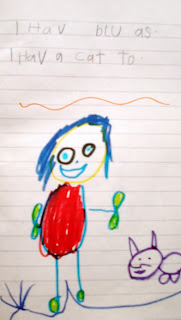 This phase is between 4 and 7, and according to Piaget the speech is now less egocentric.
An object can be used to represent something else – a cloth can become a dog.
Role playing is important and the child often play the roles of mommy and daddy.
Mountain Task
Piaget used several techniques to study and examine the cognitive development of children. A three-dimensional mountain task was used to study whether children could change the perspective.
This video from the YouTube shows a four-year-old boy.

Research has suggested that children under the age of approximately seven have problems with this task. If the task is changed a bit, younger children can solve the task.  Margaret Donaldson suggests that Piaget underestimated young  children’s abilities. A suitable language and meaningful context allows young children to think logically.  She said that appropriate language with meaningful context allows 3-and 4-year-olds to think logically.