Evolution
Gender differences is a popular topic, and our beliefs about  the reason behind gender differences can influence and change the way we treat our children. Some differences between boys and girls can be innate and the differences could have developed through thousands of years of evolution.  A problem is that is difficult to find domains that can be studied and examined for differences between boys and girls. Many domains have only recently developed – reading and formal mathematics.
Mentally Rotate Objects
The ability to rotate an object mentally is present in young babies, and a five months old baby can rotate objects visually.
Opportunities

In Canada, Eskimo women participate in hunting. Hunting requires  the ability to judge distance and to find directions. Eskimo girls are provided with learning experiences, which helps them to develop their spatial skills. And the girls develop similar skills as the boys.

In China, children study geometry for several years. By proving, both boys and girls with opportunities to practice their spatial skills, the differences between boys and girls are minimised. 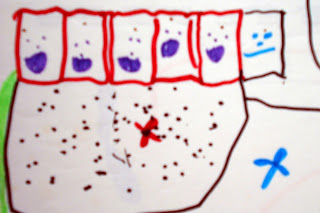 Photo: Tree In Drop Of Water by dan